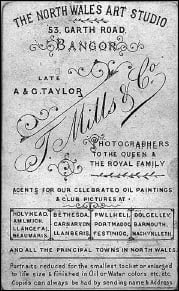 Like an episode of the BBC’s Who Do You Think You Are, history very often offers up a surprise or two.  As a company, we knew that we had a continuous history since 1876. However, a distant relative of the Mills family now living in Philadelphia, USA, recently discovered a portrait that revealed a different story.

She unearthed a still of Thomas Mills III that was taken by a Mills relative.  The image has been identified as being captured in 1861 which means we can now trace our photographic history back some 159 years!

Thomas (born 1849) was the founder of our company and set up his business in Bangor, North Wales.  The firm has remained in the family ever since.

The company was originally based at 53 Garth Road, Bangor and Thomas Mills took over the existing business of A&C Taylor, renaming it T Mills & Co (Photographers to The Queen and the Royal family).

He photographed many of north Wales’ ruling gentry including the Marques of Anglesey, The Duchess of Wellington, Lord Penrhyn of Llandegai, and The Deans of Bangor. The picture to the left is a Thomas Mills self portrait in full Masonic regalia, circa 1900.

In July 1890 Thomas Mills embarked on an 8 month tour of Canada “to record the scenes, illustrative of summer and winter farm life and the opportunities of sport in the Canadian Rocky Mountains”. He repeated this tour again in July of 1893. During this period his youngest brother, John William (born 1865), also a photographer, joined him in the business and specifically took over for him whilst he was abroad.

Gwilym and two of his five brothers Jose and Dorondo joined their father in the family business between 1898 and 1904. They then moved the business to the prosperous city of Liverpool in 1908, and were employed by Weisker Bros. Kinematograph & Photographic Experts of Wilde Street. The eldest brother Thomas Ernest, who had no interest in photography after leaving school, left home in 1896 and emigrated to the USA at the age of 15!

Seeing a great opportunity to expand, Thomas bought the Weisker Bros. business the following year and changed its name to Carbonora. The new company quickly established itself as the region’s foremost photographic operation. The name Carbonora was derived from the ‘carbon’ process used in the development of photographs at that time and by simply adding ‘ora’ at the end.

Gwilym Eiriol Mills (born 13th March 1885, Bangor) remained in charge of the Wilde Street business whilst his two brothers Jose and Dorando opened separate photographic firms, one in Walton, a suburb of Liverpool (trading under the name of Dorondo), and the other in London Road, near the city centre.

Gwilym ran a successful business producing postcards depicting scenes of Liverpool and its surrounding area. In 1909 Carbonora became the official photographer for Liverpool City Police recording many events such as ‘passing out’ parades and portraits of serving police officers.

Acting as a freelance agent for the local press and the Liverpool City Police, one of the largest projects undertaken by the company in its earlier years was to record the 1911 Liverpool General Transport Strike. In all, some 81 images were taken by Gwilym during the strike and each scene was captured on glass negative. In modern terminology, you could say that he was “embedded media”!

Gwilym Mills’ photography was always at the heart of the action and he can be seen in the photograph below (to the left of the barrel) with police officers of the time.

Following the 1911 strike, Liverpool City Police seized photographs taken by Carbonora as several images depicted officers baton charging crowds. Approximately eight of 81 were not returned and were either held or destroyed by the police. The remaining images were produced as a postcard set recording the strike from the beginning to its ultimate resolution.

Today, we take for granted the instantaneous transmission of news on a world-wide basis. But in an age when newspaper photography was restricted and the cinema was still in its infancy, a detailed visual record of such a major industrial disturbance was unknown. And this is what makes the Carbonora postcard set unique and invaluable. 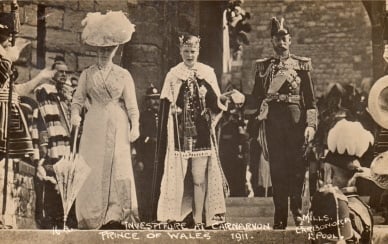 Other high profile events covered by Gwilym included the investiture of the Prince of Wales (future King Edward VIII) in Caernarfon Castle in 1911 (photo right) and the 1919 Police strike. 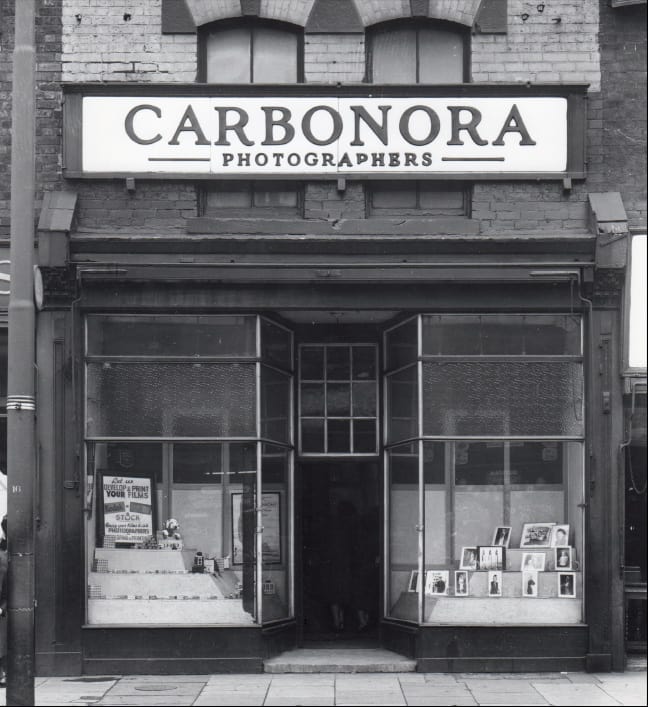 Following the First World War, Gwilym Mills moved his company from Wilde Street to 145 Walton Road (near Anfield) Liverpool. The business continued to thrive but on the 10th February 1922, his father Thomas Mills passed away. 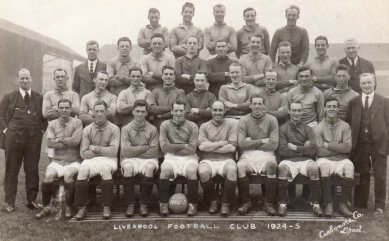 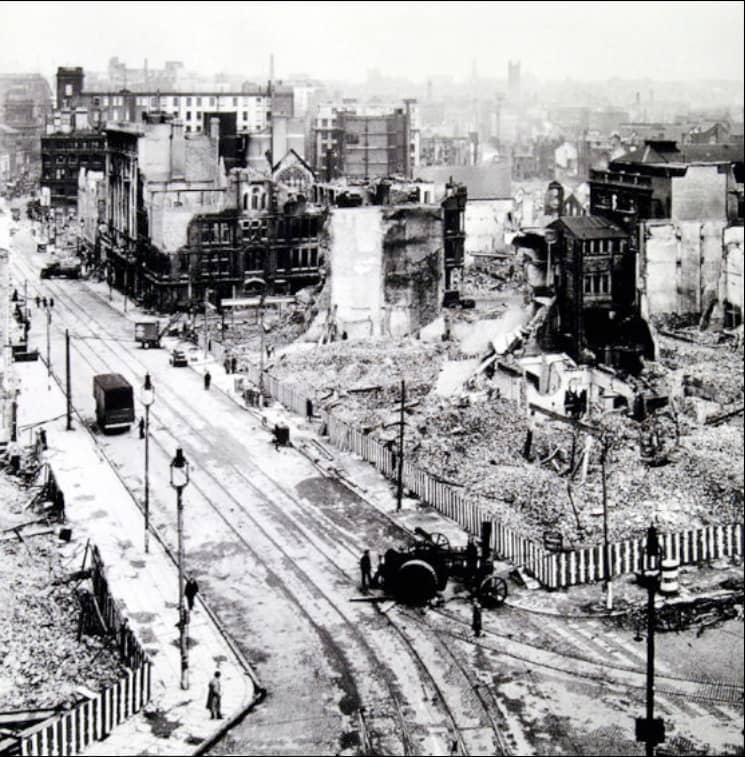 Before the Second World War, a sister office was opened in central Liverpool on Lord Street. In 1941 however, the premises were tragically bombed during the Liverpool blitz.

All records and photographic plates stored in the building were completely destroyed.

The photograph shown to the left clearly illustrates how much destruction the German bombing raid caused. (The Carbonora premises were situated in the lower left corner between Lord Street & Castle Street.) 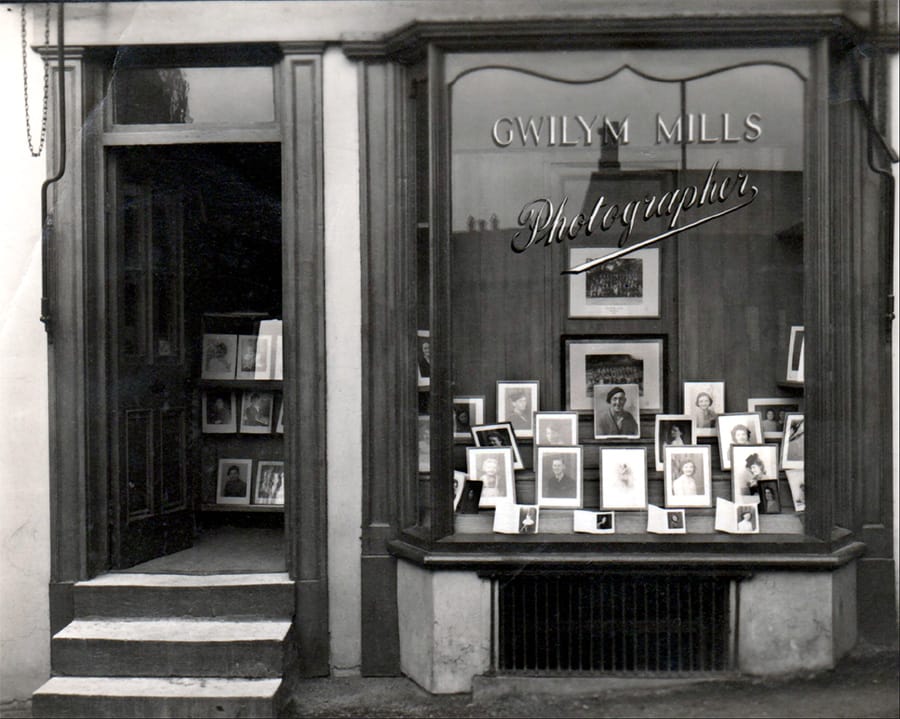 The firm overcame this disaster by concentrating its activities in Walton and by opening new premises at Windermere in the Lake District. A solid trade in photographing child evacuees was developed but once the Second World War was over, Gwilym decided to sell the Windermere outlet and return his focus to Liverpool.

Gwilym Mills remained in charge until his retirement in 1950. He was succeeded as managing director by his son, John Mills (born 7th October 1925 in West Derby, Liverpool) and on July 6th in the same year, Carbonora became a limited company. 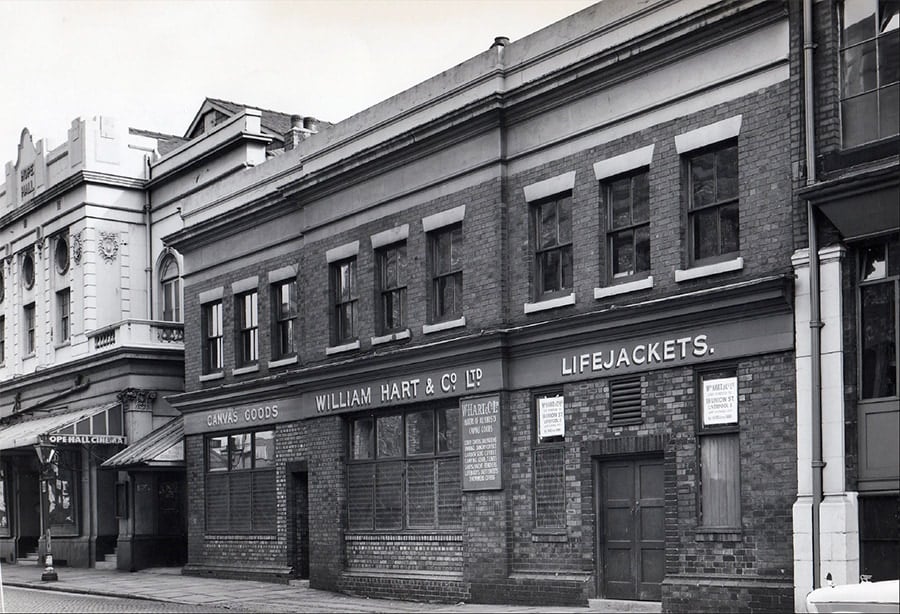 With the same vision and determination to succeed, John moved the company to larger premises in 1960.

Purchased from William Hart & Co (a canvas goods and life jacket manufacturers), the building (located next to the Hope Hall Cinema) would be home for many years to come. 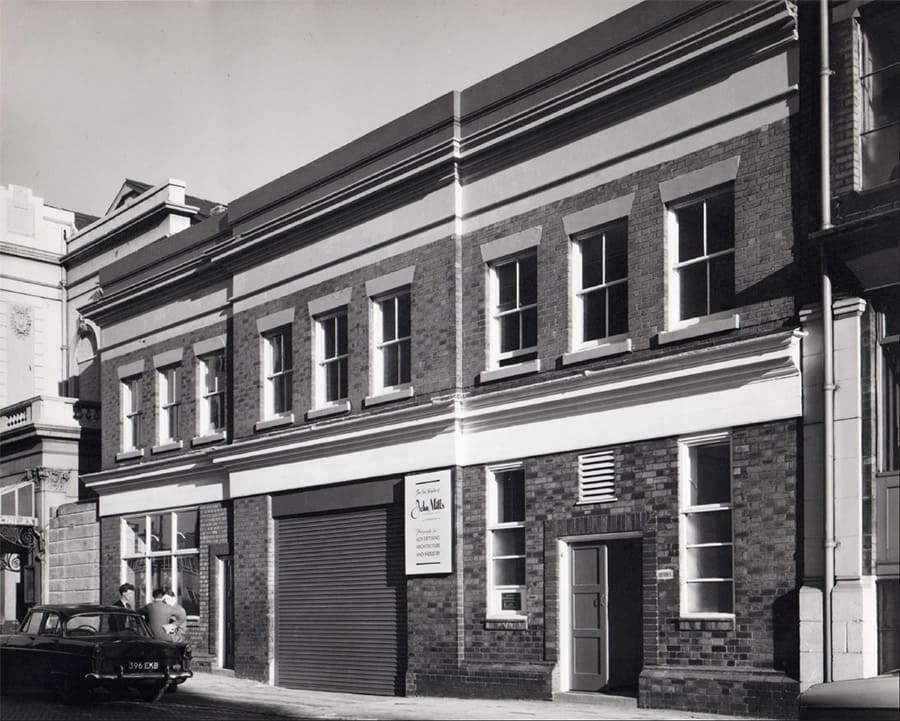 And to welcome a new decade, the company changed its name to become John Mills Photography Ltd on the 5th February 1960.

The picture right is from February 1961 when the company opened its new offices and studio at 11 Hope Street. 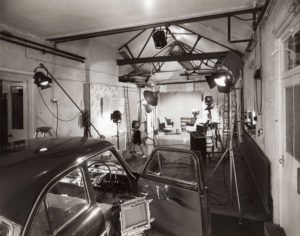 From its early days in Liverpool, Gwilym Mills had concentrated on the profitable activity of recording social events on Merseyside, processing them as postcards and distributing them to local newsagents for sale. However, John Mills now saw new opportunities and so the direction of the business changed.

Before joining the family firm in 1948, John Mills spent three years with the Royal Air Force, followed by a two-year course at the Blackpool School of Photography. With his focus on commercial, industrial and aerial photography, the company’s vision was now clear – to build the family business into one of the leading photographic organisations in the UK. 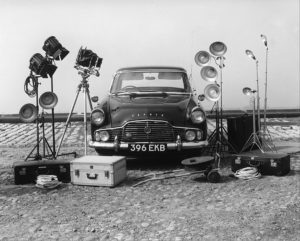 John was recognised across the region as an astute yet fair businessman and a photographer of some repute.

He was to shape the business through a number of brave commercial decisions that expanded services in both scale and scope.

It was his vision and knowledge in the field of photography that brought further expansion by opening a processing laboratory in 1965.

This was followed three years later with the opening of a colour print laboratory and renting a vacant Synagogue at Hope Place , just down the road, for extensive studio operations. The image below shows the studio in full swing in 1970. 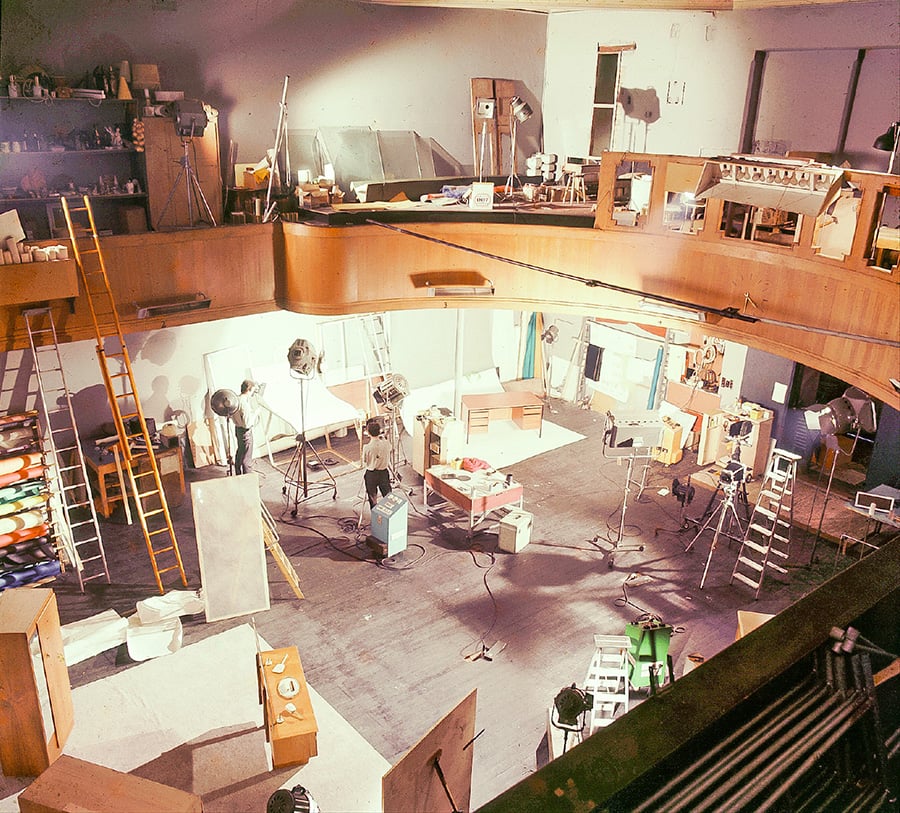 Whilst President of the British Institute of Professional Photography (1966 to 1967) John was afforded the honour of being invited by Kodak in the USA to talk about his industry experience. Even whilst sailing across the Atlantic on the Queen Mary, John shot stills throughout the journey and on arrival captured the wonder of New York.

On 27th March 1971, Gwilym Mills, the man that had steered the family business for many years sadly passed away.

Although the business was going from strength to strength, John Mills finally realised his professional ambitions in 1977 when he created a purpose-built Liverpool studio. He expanded Hope Street by adding a further 4,200 square feet of production space. Now the entire photographic operation was working from under one roof. 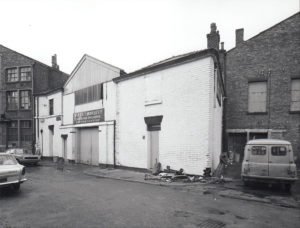 This was achieved by taking out a 75 year lease with Liverpool City Council for the premises to rear of Hope Street at 22 Arrad Street.

Previously occupied by Maple Automobiles Limited, John Mills had been watching these premises since 1968! The lease was priced at the modest sum of £650 per annum. 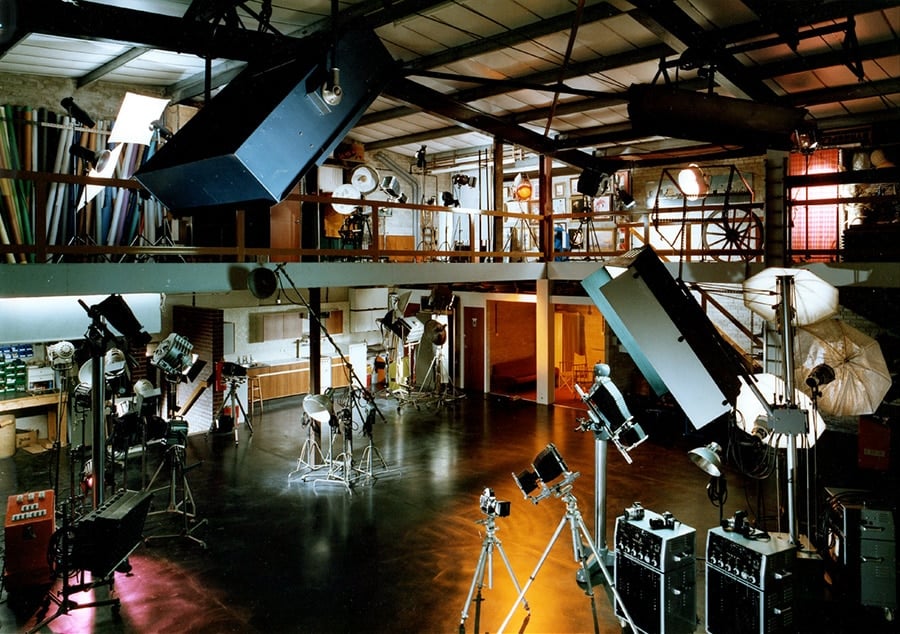 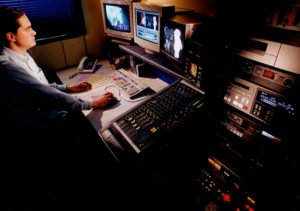 With the advent of business television in the early 80’s, a video department was launched at the studio in 1983.

The in-house production facility developed quickly as technology advanced throughout the next two decades.

In 1986 Andrew Mills (John’s only son) left his position at Kadek TV at Shepperton Film Studios to join the company. The following year, he was followed into the business by his sister Jenny Griffiths.

The company embraced the computer age in 1989 with the first personal computers being introduced and the video department went digital in 1994 when our first non-linear editing suite was installed by AVID.

Digital exhibition services began in 1994 with the purchase of the company’s first large format inkjet printer and after reaching a lease agreement with Canon, a colour laser copying service was launched too.

The company’s involvement with some of the UK’s major projects continued with the filming and lensing of the construction of the A1M Hatfield Tunnel; the redevelopment of the Liverpool and South Docks by Merseyside Development Corporation; the construction of the A55 Conwy Tunnel and more recently the Liverpool One project by Grosvenor; the Development of Media City for Peel Properties; and the Manchester Metrolink project recorded over 6 years from the skies above Manchester.

1998 was a momentous year for the company with the purchase of its first digital Nikon camera, the launch of our conference production & AV services, and the recruitment of our first creative design staff. The same year also saw us join the worldwide web with the design and launch of our first website.

To sum up the all-encompassing services now offered by the company, a name change was agreed…and on the 1st December 2004 The John Mills Group re-launched as Mills Media Ltd.

The company premises in Hope Street had become outdated and were hindering the expansion of the overall business… so for the first time in almost 100 years, the company went back ‘across the water’ to new 10,000 sq.ft premises on Wirral at Twelve Quays Business Park. The premises on Hope Street were sold to the Everyman Theatre to allow them to build an award winning state of the art theatre complex.

Although the reins were now in the hands of his son Andrew as Managing Director and daughter Jenny as Financial Director, John retained his interest in the business as Chairman until his untimely death on the 27th July 2010.

From humble beginnings in the late 19th Century to the cutting edge of 21st Century media, the family owned business continues to thrive. Mills Media – a truly unique business.

Any cookies that may not be particularly necessary for the website to function and is used specifically to collect user personal data via analytics, ads, other embedded contents are termed as non-necessary cookies. It is mandatory to procure user consent prior to running these cookies on your website.